On this day when we are celebrating Julian and her record of the Revelations of Jesus much will be said about her learning that “Love was our Lord’s meaning,” and that “All manner of thing shall be well.” But there is another line, less easeful than these, that sticks out no less compellingly from the familiar block of text. It is from the first showing where Julian describes the vision of the drops of blood flowing down without stint over Jesus’s forehead. She says of the vision, “nevertheless, the bleeding continued until many things were seen and understood.”

The pandemic has exposed, or has helped to expose, so many societal inequities and injustices. Things that never used to show up on the radar of the comfortable have succeeded in getting widespread attention. But now that the pandemic has begun to loosen its grip and some semblance of normality is in sight, the old normality could reassert itself, the veil be firmly drawn back over what has been exposed — anything to keep from having to reckon up the cost of collective blindness.

But like Julian, with Julian, we have to bear with the pain of the whole of the vision made to her. As we hold fast the word that all shall be well, just so we must hold fast the bleeding head of Jesus, revealed today in those who bear the weight of injustice and oppression, understanding where those wounds have come from and our part in them. Julian says later that, in the end, “all shall be brought to joy,” but not until we have “willingly remained on the same cross with Jesus with his help and his grace until the last moment.” To stay with the societal ills the pandemic has exposed until they are healed and cured, and we with them, is our participation in the cross of Jesus. And Jesus with his glorified wounds will be with us always, as long as that takes. 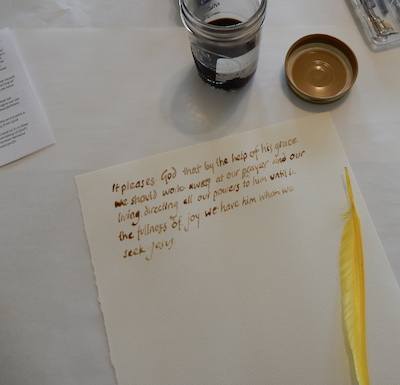