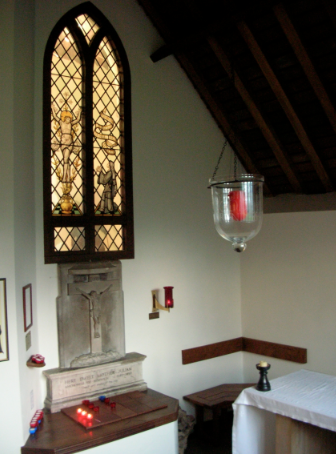 Dame Julian lived in Norwich, England in the 14th and early 15th century, and spent much of her life as an anchorite, a vowed religious living by herself in a small room, called an anchorhold, attached to the parish church of St Julian at Conisford in Norwich.

Of herself, there is no more evidence than what she offers by her own witness, as well as the witness of a few bequests, and the testimony of her contemporary Margery Kempe.

Despite the attempts of scholarship to uncover her particulars, "Julian's life," wrote Fr Robert Llewelyn, "has passed largely into obscurity, and no doubt this is how she would have wished it. 'You shall soon forget me,' she writes, '(and do so that I shall not hinder you) and behold Jesus who is teacher of all.'"

What is known about her is her remarkable book, The Revelations of Love, an account of and the fruit of twenty years' reflection on a series of visions which revealed to Julian the depths of God's unconditioned love for us in Jesus Christ.

Today virtually nothing is left of the original cell where Julian lived and prayed, wrote her book, and ministered to those who came to her window. In the 1950s the cell was reconstructed, along with the church which had been destroyed during WWII bombardment. The reconstructed cell serves as the Julian Shrine, a place of pilgrimage and prayer. Next door to the church the Julian Centre, run by the Friends of Julian, offers hospitality, a library, and a bookshop, and the All Hallows Guesthouse ministers to pilgrims. The Anglican Communion celebrates Julian's feast the 8th of May.

Julian's message and theology are far richer than popularly supposed. The Revelations are a deep well of teaching and insight, and their wealth is not to be captured in a few pithy quotes. Many books have been written that explore the message of the Revelations as a whole, and its implications in depth, and their contribution is invaluable. The "even-Christians" for whom Julian wrote her book are to be encouraged to learn as much as they can from such treasures, but also to attend to the Revelations themselves and to read in the presence of "Jesus who is teacher of all."